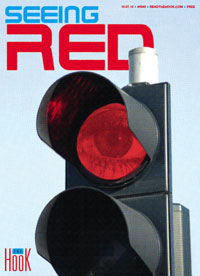 With the arrival of Charlottesville’s first red light cameras comes the end of an honor system between drivers that has existed for decades, at least at one tricky intersection. Now it’s come to this: tickets for red light running will be generated by machines, not cops. Welcome to the world of 21st Century law enforcement.

But is this a legitimate effort to promote traffic safety? Or simply a cash grab by a private company and local government? More importantly, will the cameras actually stop red light running or simply have local drivers seeing red?

At a press conference last month announcing the installation of four red light traffic cameras (capable of taking photos and “situational” video footage of vehicles, not drivers) at the intersection of Rio Road and 29 North, County officials emphasized it was an effort to “increase traffic safety” at the dangerous intersection.

It’s an idea that has been discussed for nearly a decade, and after the Virginia General Assembly READ MORE

One response to “Seeing Red: Safety measure or cash grab?”